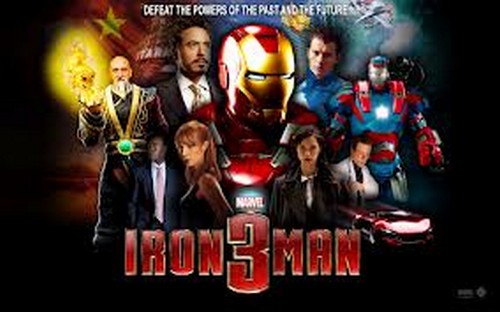 Robert Downey Jr. has us buzzing in the newly-released trailer of Iron Man 3. The actor reprises his role as Tony Stark in the third movie of the franchise, and the action seems to have become bigger and better than ever; from fighting strong and vicious enemies to having to protect the people who are most important to him — the trailer shows enough to make us pre-order our tickets once they go on sale. Ha.

The storyline focuses on Tony who seeks vengeance on the people who destroyed his private world while having to form an army of his own in hopes to beat the newest baddie, Ben Kingsley. From the 2:27 clip that Marvel has decided to unveil, near the ending we can see Ben targeting Tony’s house, fully aware that him and his secretive/girlfriend Pepper Potts are inside. And all of a sudden, he launches his missiles directly at it, and from that point on, it just becomes totally epic.

On a sad note however, it has been confirmed that this movie will conclude the trilogy series for good. But though this may be the case, producers of the film have said they made sure that when closing the last part in the movie, they made sure that it left open more opportunities for other directors to take on Iron Man 4 and explore other storylines based off the ever-so-popular comics. Screenplay writer of Iron Man 3 and good friend to Robert, Shane Black, shared the following: “I have the feeling that the story we developed for Iron Man 3 actually concluded a trilogy, while [also] leaving the door open to a fourth.”

“I had a lot of discussions on this subject: ‘Is this the last Iron Man for Robert?’ Something tells me that it will not be the case, and that he’ll be seen in a fourth or fifth.” And what backs up this point of Robert most likely to return for another one in years to come is because he recently explained in an interview that the role of playing Iron Man was pretty much the perfect role he could have possibly played: “I think Iron Man wound up being the first time I screen-tested since Chaplin. As far as I was concerned, it was destiny.”