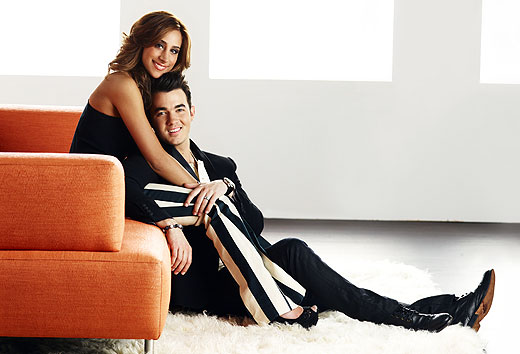 Kevin Jonas‘ reality show, Married To Jonas, has been renewed for another season. In fact, filming has already wrapped and a premiere date has been announced to be April 21st. After an impressive first season with ratings surging high, along with a demographic audience at 13-18, E! has proven itself to have another hit on their hands.

But, of course, as with every reality show, the drama always tends to follow, right? Well, this season isn’t any different as Kevin’s wife, Danielle Deleasa, seeks for a job which would mean she won’t be around to see her hubby get back on stage as the Jonas Brothers reform for the first time in four years. YES, four years — and we’re feeling very, very old when we say that. Ha.

Another part that this season will strongly focus on is Danielle’s desire to start having children with Kevin, while he is eager to get back on the road and tour with his brothers – so you can already sense some kind of conflict going to come in between these two, seeing that they both have different plans for their upcoming future. Oooh, this is going to be juicy!

E! has since released a statement on Kevin and Danielle’s newest season of Married to Jonas and how much their relationship just happens to be put to test as they tend to be apart from each other quite a while: “This season, the phrase “one big happy family” is put to the test when challenges, triumphs, family celebrations, pressures and drama reveal themselves as Kevin and Danielle, begin to really settle into their lives together, while attempting to accommodate the needs of their very close–and very different–families.”

The statement added: “The Jonas Brothers are fired up with new music and a pending world tour, while new challenges at home, the desire (and pressure from their families) to have a baby, and their very different in-laws, put Kevin and Danielle’s marriage to the test. One thing is for sure; Danielle and Kevin, along with his famous siblings Nick and Joe and the couple’s extended families, are in for some personal and professional ups and downs this season.”

Watch the teaser below: