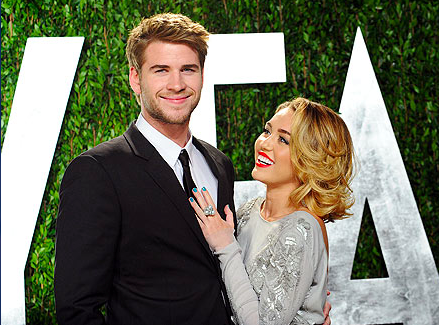 Miley Cyrus‘ relationship to her fiance Liam Hemsworth is reportedly over, blaming the recent run-in Liam had with January Jones that had her pull the trigger. The two had been fighting for weeks now, and though many media reports were already reporting this, the singer continued to deny the printed stories despite being seen in LA without her wedding ring on — there was definitely tension in her relationship to the Aussie star.

Liam was said to have hooked up with January at an Oscers after-party AFTER learning that Miley had preferred to take her male assistant to Elton John’s party than her beau. Hemsworth was upset about it and it caused another fight; the two have been bickering for quite a while now and every time they get into it, it has become worse and worse which is why they have decided to call it quits.

Liam has flown out to Australia to get away from Miley who has been nagging him not to leave her, she wants to give the relationship another shot, but Hemsworth needs to get his head straight; the constant arguments they have been having isn’t healthy, especially when they were considering marriage for this year too.

“Miley and Liam are done; it’s over. She likes to party really hard and can be pretty wild,” a source told Page Six. “It became a problem for him. They have broken up before, and are broken up again now. There was drama because she suspected he had a wandering eye. And she recently tweeted a denial that he cheated. While Miley has insisted they are still together, right now they are very, very much apart.”

They have broken up before and got back together, so it’s very likely that they may get together again, right? We sure hope so because these two were a nice couple!