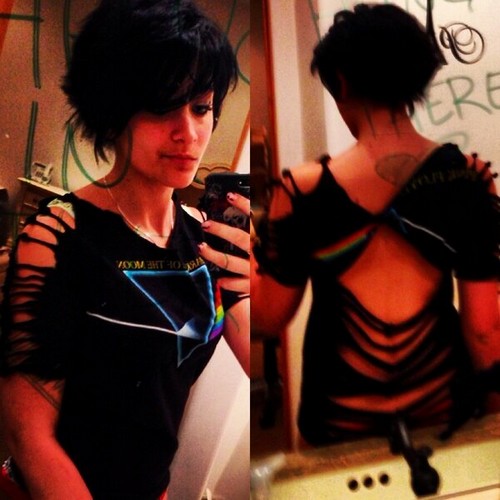 Paris Jackson has undergone a total makeover earlier this week, cutting off more than half of her brown hair, and ditching the boring old jeans and color-plain shirts for a ripped one instead. The daughter of Michael Jackson is clearly starting to experiment with fashion now that she’s reaching that age where she tries out different looks to see what fits her best. We’ve all been there! Ha.

In the picture she had posted on her Twitter page, the 14-year old seemes to have dyed her hair completely black, while you can see what almost looks like a tattoo on her back, before she shared another photo of herself with an edgy pink earring. We hope her new makeover has nothing to do with her jealousy over her brother starting to take all the limelight in the family by making a name for himself as a correspondent for Entertainment Tonight.

We previously reported that Prince Jackson has been entertaining viewers on the news show in which he showed off his interview skills in a very impressive manor. However, non of that sat well with Paris who is in desperate attempt to become a star herself and follow in the footsteps of her father. No one seems to be listening to her though, so this could be her way of trying to stand out from the crowd.

It’s almost as if Paris is trying to shed her good girl image and replace it with her grungy side. Surely there’s nothing wrong with that, but when you’re only doing it because you want people to notice you more, it’s a little worrying and maybe someone needs to have a chat with her. She’s only fourteen so a meltdown crisis at that age would just be ridiculous to experience so soon.