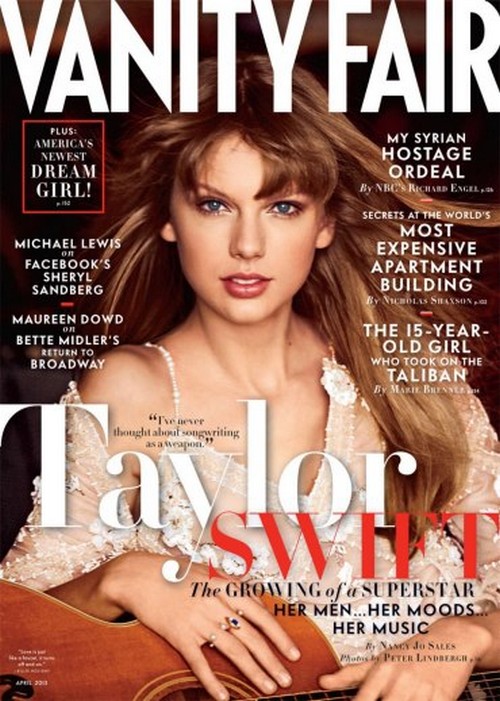 Taylor Swift is finally sticking up for herself by addressing the constant lies she sees being printed about her and a random fella who she supposedly happens to be dating, even though most of the time, there’s no truth to it at all, so she claims. The 23-year old who is covering Vanity Fair’s April issue seems to have wanted to set the record straight on her relationship status and how many people she has really dated since 2010. You’ll be shocked to hear her answer.

According to her, she has only been with TWO guys in the last three years, though we find it hard to believe, but maybe that’s just because the tabloids take stories way out of context to make them seem bigger than they actually are. Whatever the case, Taylor feels that the media always want to portray her in a bad way due to the fact that she has so many break-ups songs about her ex-boyfriends– this gives them the opportunity to make up things which people would easily believe seeing that she’s always talking about boys in her songs.

“If you want some big revelation, since 2010 I have dated exactly two people,” the country singer claims which we find extremely hard to believe – no matter how many times she tries to convince us. “The fact that there are slide shows of a dozen guys that I either hugged on a red carpet or met for lunch or wrote a song with. . . it’s just kind of ridiculous.”

How many of you believe Taylor’s comment on only having had two boyfriends?