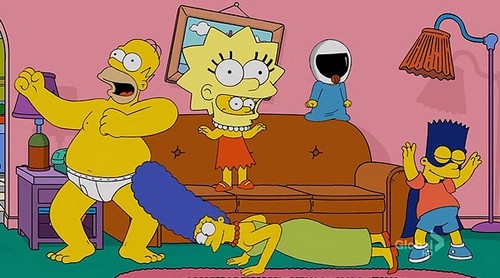 The Simpsons join the addition of millions around the world who have posted their version to the viral Harlem Shake dance. The very unexpected video surfaced on the internet over the weekend and fans of the show will be laughing their heads off when they see this; little Lisa is reenacting the dancing in the viral dance, while Homer’s voice can be heard in the background.

All of a sudden, everyone goes crazy – Marge is doing press-ups, Bart is dressed as Batman, Homer is dancing in his underwear and Lisa has a gigantic version of her head… on her head. LOLz. The 37-second clip then sees the entire bunch of regular cast members such as Millhouse and Principal Skinner make a cameo in the video as they join in on the tacky dance. It’s hilarious.

The Harlem Shake frenzy took off late January and since then, literally everyone has made their own version to the song; including celebrities such as Kendall and Kylie Jenner, Ryan Seacrest and even rapper T-Pain. The song has become so popular that it has been managed to storm the iTunes charts, firmly holding the number one spot in the US while entering the top 10 chart in over 34 countries. So, is this the next Gangnam Style?

Well, not necessarily. It hasn’t actually got a specific dance to it that makes it so special, but seeing celebrities and carton characters getting in on makes people like us want to upload our own versions. Ha. Wait – we just had an epic idea. How about Psy gets together with Baauer and they collaborate on a song together, and then they can make another viral dance to it? That’s another viral hit guaranteed.

Let us know what you think! Have you posted your version of the Harlem Shake on YouTube yet?!