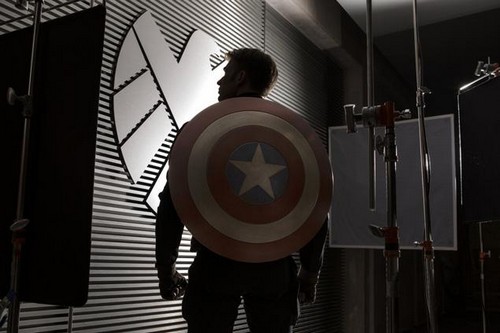 Get ready, Marvel fans!! Although we’re just weeks away from Iron Man 3, we are happy to announce that Captain America 2 has entered production and will hit cinemas in April 4th, 2014. Disney surprised us this morning with a picture of actor, Chris Evans on the set of the second installment of the hit franchise.

Although we are still puzzled as to why Chris – who played Johnny Storm in Fantastic Four – was allowed to reprise his role in the movie, we can’t deny that he did an amazing job the first time around and can’t wait to see what  is said to be one of the biggest movies of 2014.

The first official photo shows Chris on set in his costume as he gears up for another war whilst wearing a massive shield on his back. Along with this amazing news, we also recently learned that Revenge’s leading lady, Emily Van Camp will be starring in the film too. The actress is expected to play an agent, according to Disney, who revealed Emily’s role in the movie earlier this year.

Marvel Studios don’t doesn’t seems to mind dishing  secrets to their eager fans, starting with all the locations that Captain America: The Winter Soldier will be filming at. If you’re lucky, you could spot the crew filming scenes in Cleveland, Ohio, Washington DC and Los Angeles where the cast have recently started production.

The first installment of the movie, Captain America: The First Avenger, raised made $176,000,000 domestically and $370,000,000 worldwide. Early analysts are already predicted the next one will make a whopping $600,000,000+. This is all thanks to the wildly successful Avengers movie which made history last year as the biggest film of 2012, with sales of more than 1 BILLION!!