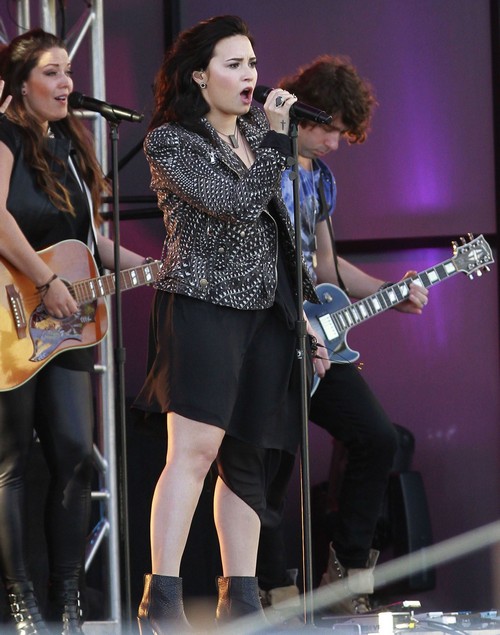 Demi Lovato is among the dozens of stars who have been lined up to perform at this year’s KIIS-FM’s Wango Tango concert, which is set to be held at the Carson’s Home Depot Center on May 11th. The former Disney starlet is expected to sing several songs of her new album, Demi, including her wildly-popular Heart Attack.

Other artists who have been confirmed for the big event are; Bruno Mars, Fall Out Boy, Afrojack, Jason Derulo, Flo Rida, Will.i.am, Emeli Sande, Maroon 5, Miguel and even Carly Rae Jepsen. Let’s keep our fingers crossed she’s not going to sing ‘Call Me Maybe’ again because we can no longer hear that song! Ha. We kid, we kid.While many of the stars who are set to hit the stage have already been announced, people were already buzzing on who could possibly guest-host the show this time around. As we all know, Ryan Seacrest is the main man for the show seeing that he is pretty much the reason behind the success of KIIS-FM, but this year, producers have decided to let Britney Spears take center-stage as she gives the American Idol host a helping hand at his duties. Whether she’ll perform or not is yet to be revealed.

Tickets for Wango Tango’s sixteenth anniversary will go on sale at 10 AM on April 6th, while April 5th will see many tickets already go on radio pre-sale. So, if you want to get your hands on some tickets, you already know what to do… don’t wait and hesitate because once they are sold out, they are gone! Will you be going to the concert, and if so, who do you want to see?