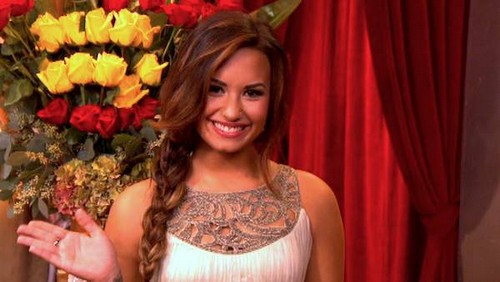 Demi Lovato almost gave us a heart attack with her amazing performance on last night’s episode of Dancing with the Stars as she sang her heart out while performing her latest single.   But get this — the 20-year old was said to have been suffering from a cold earlier in the week, and when she did her rehearsals for her performance, she wasn’t feeling any better.

Fortunately, we didn’t hear her mess up at all. In fact, she sounded pretty damn good to us, and since she received a standing ovation, we’re sure the audience loved it just as much we we did. Ha.   The singer is gearing up to release her forthcoming album Demi – out in May – which Lovato recently explained is her most personal record yet.

Speaking to Jimmy Kimmel two days ago, Demi explained: “The album definitely has a lot of meaning to me,” she said. “I relate it to a lot of personal experiences that I’ve had … some really awesome pop songs that I think are super-catchy, but at the same time, there’s some more adult songs … I speak about pretty heavy stuff that I haven’t spoken about before.”

While she already has a top 10 single under her belt from her new record, that’s not the only good thing that came her way last month. She has also been invited back to judge on X Factor’s third season which starts filming in a couple of weeks time. Demi said she was stoked to get the call because she loves working with Simon Cowell.

So happy to hear that she’s doing so well now. It was just under two years ago when she checked herself into rehab as she battled anorexia and bulimia, having blamed the celebrities in Hollywood for her sudden downfall. But all is good now! Demi is back on top; mentally, physically, and musically. Ha!

See her star-studded performance on DWTS below: