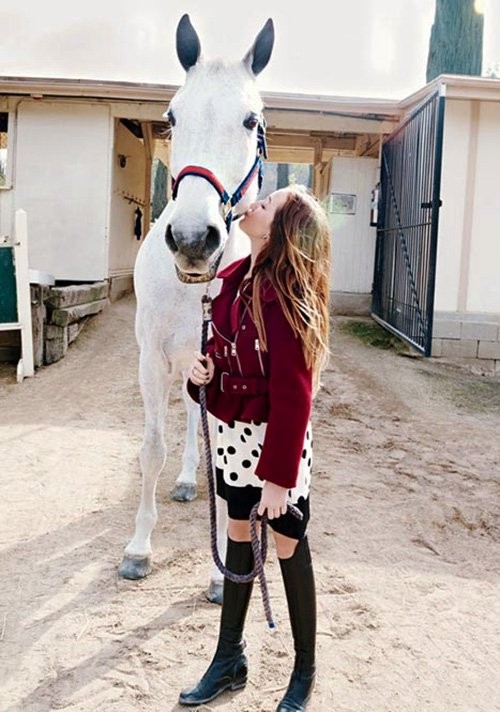 It might be time for Miley Cyrus to take two steps to the side because apparently it’s time for her 13-year old sister, Noah Cyrus to shine a little herself. The young girl is committed to riding horses and competing in shows a few times a month, with Noah’s huge goal being to score a spot on the Olympic Team in the next several years.

In between these lofty aspirations Noah is posing for a Pamela Hanson photo shoot in the May issue of Teen Vogue. Within those pages she dishes on all sorts of things, including how Justin Bieber was her first true love.

“When I met Justin Bieber, I could barely speak. I was just going crazy inside. It was at an award show in Canada, and after he went and changed for his next set, I kind of stole his clothes. He doesn’t know it yet. Miley’s stylist dressed him for that event, and they had his stuff, so I took it home. Justin was my first love,”

She also contemplates life in a famous family. As expected Noah loves the perks that go with being surrounded by celebrities but the paparazzi can be a bit rough. Noah seems to take it in stride though and as far as her goals she seems to be pretty grounded. It’s actually kind of cool to see Miley’s little sister really doing her own thing and following a path that she loves rather than just try to follow in her big sisters footsteps.

Do you think Miley has set a good example for her younger sister? Even if she hasn’t and some of her decisions have been questionable, it’s pretty obvious that Noah isn’t too easily swayed by the behavior of others around her. Will you be keeping an eye out for Noah in the future? Tell us your thoughts in the comments below!

Teens Will Be Able to Get The Justin Bieber Debit Card