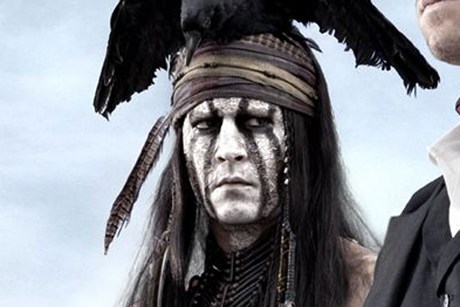 Johnny Depp has proven once again why he’s one of the best actors today, after the just-released third trailer of the anticipated movie, The Lone Ranger was released.  Based on a true story, the film follows the life of John Reid, who worked for the law before he came in contact with a native American named Tonto (Johnny Depp) who was fighting for justice.

The storyline of the film is self-explanatory upon watching the newest trailer along with all of its action-packed snippets which sees John ride his horse on a train when he suddenly sees a tunnel just miles away. But instead of jumping off and looking for a great place to cover himself for safety, Reid stays on and has his horse duck as he barely manages to avoid getting hit at the tunnel’s entrance. You have to see it to believe it.

The production company is hoping for this latest project to be a hit after having spent $250 MILLION on it. But then again, hiring Johnny Depp for any of your movies instantly means it’ll be a hit, with the expectation of The Tourist which absolutely bombed at the box-office. Maybe people just didn’t want to see co-star Angelina Jolie. Haha! Whatever the reason for its flop, Johnny gets it right most of the time.

From the trailers that have already been released, the humor that we all fell in love with in ‘Pirates of the Caribbean’ lives on in The Lone Ranger, it’s almost as if this is just another sequel to the movie seeing that the costumes, the storyline and the characters are very similar to ‘Pirates…’. Catch the movie in cinemas July, 3rd.