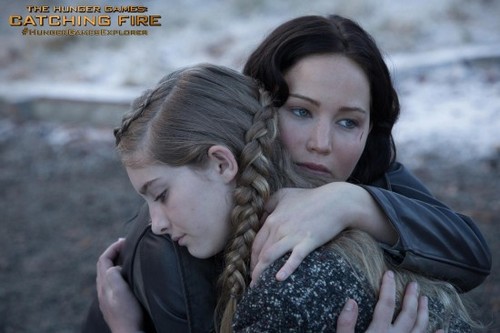 The time has come where we start buzzing for Hunger Games: Catching Fire, now that the first official trailer has been released. Yup – last night at the MTV Movie Awards, fans of the movie (including us) were treated to a two-minute teaser where we see Katniss and Peter head on out for their Victory Tour, but little do they know that the danger that they are about to face could separate them forever.

In several snippets, we see Effie Trinket act her usual wacky way while the mood of the story turns dark when President Snow explains his plans to murder Katniss over her victory during the Hunger Games. “Because of her, they all pose a threat,” Snow declares in the video as he further adds that all the families now believe they are invincible, and he’s ready to prove them wrong. Another snippet is shown of Everdeen running over to Gale who is beaten with a whip before she gets hit herself — and another snippet is shown. It’s definitely frustrating when you get into a short clip and it changes so fast, but it keeps the tension rising.

The storyline strongly focuses on the President’s plan to execute Katniss now that she has all of a sudden become a hero in her district – filled with unfortunate people that are struggling to feed themselves. Snow wants the people in District 12 to feel worthless as he continues to add that Katniss having become a “beacon of hope” for the children is absurd and therefore, he organizes a set-up to have her killed.

MTV confirmed last month that they would be premiering the teaser during the awards show yesterday evening, and the response has been overwhelming so far seeing that the trailer has already received 3 million hits in less than 24 hours on YouTube alone. The film is scheduled for release on November 22nd while the next installment starts shooting mid 2013, it was recently reported.

If you’re a die-hard Hunger Games fan and you have still not seen the teaser, see how the action-packed stunts go down below. You won’t be disappointed, that’s for sure: