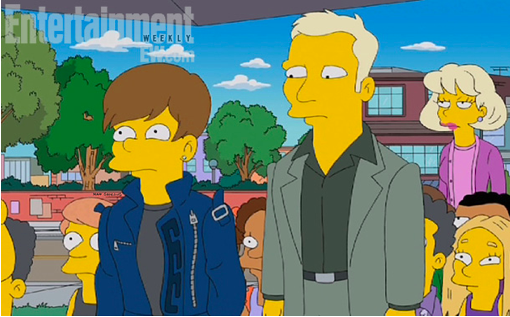 In the last 25 years it seems that you know you’ve made it in Hollywod when you get to appear on an episode of The Simpsons and this Sunday it’ll be Justin Bieber’s turn to take a spin with Fox’s first family. Bieber had tweeted about the guest spot last year but when he deleted the post some wondered if that signaled that the gig wasn’t happening.  Obviously everything is indeed a go and on this weeks episode Bieber plays himself in a cameo role. He’s trying to get into a talent show that features Bart Simpson playing the piano. Biebs is none to happy when he just can’t seem to get a break.

In real life Bieber has had more than a few breaks. In fact, it seems to be all that he gets. He screwed around on Selena Gomez and she still takes him back. He gets caught rolling blunts with his bad boy friends and nothing happens. He lashes out and is borderline abusive when he doesn’t get his way and still, there is no accountability.  Perhaps the fake world of The Simpsons is the only place that will tell this clown no! Cartoon world seems to have more accountability for Bieber than real life.

Will you be tuning in to watch Bieber’s character on this weeks’ Simpsons?  If you were once a huge fan of his, are you still? Has Bieber’s behavior made you like him any less or do you still think that he is the current king of pop? Tell us your thoughts in the comments below!