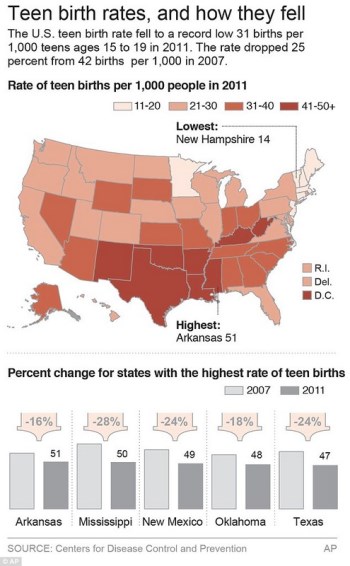 Finally, the trend among teenaged girls to have babies before a high school diploma is starting to drop considerably!  The U.S. Record for teen births is currently at an average percentage of 31 girls out of 1000 will have a baby while in their teens. The average varies slightly from state to state but overall the numbers are seriously improving

According to the CDC’s findings the teen drop in the last five years coincided with an overall decline in births.  Experts in the field believe that this is due to a weak economy that has made people rethink the number of additions to add to their families.

Hispanic women have had a significantly higher pregnancy rate and even their numbers have fallen. The CDC seems to attribute part of that to the crackdown on illegal immigrants allowed to stay in this country after leaving countries like Mexico.  This also means that second and third generation immigrants are having less children as well. Studies have shown that the longer a family lives as an Americanized unit the more likely they are to follow typical U.S. Traditions. Most Americans aren’t inclined to start popping out children in their teens and to end up with a massive family before their 30th birthday.

The public education system is also better with educating teens on their sexual responsibilities and encouraging teen girls to take control of their bodies and their future by using birth control. While the numbers are down, there are still an awful lot of teen mothers out there that are struggling to grown up while taking care of a baby as well. What do you think would help for those numbers to drop even lower than 31 out of 1000? Tell us your ideas in the comments below!