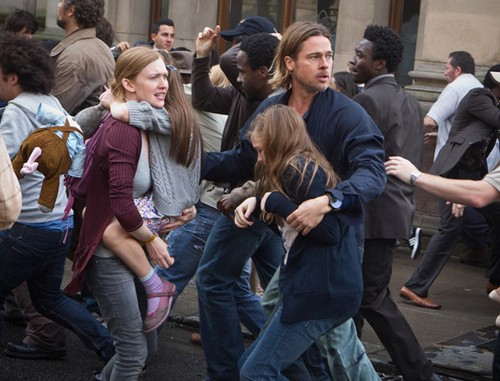 First we had sparklie vampires, super strong werewolves and now zombies are the hottest thing around.  Fans need to thank the creators of The Walking Dead for convincing the general public to embrace the dead walkers. On June 21st Brad Pitt‘s new flick, World War Z will hit theaters nationwide and it’s taking aim at becoming a huge summer hit. It’s about a race to defeat the zombie parademic that is quickly sweeping the globe.

Clips of the film have been coming out and we are learning about the heightened threat of the infected people and why it is that Pitt’s character feels that he himself has to be involved with saving the world. He also needs to make the crucial decision of whether or not to stay in protective custody with his family or strike out and put himself at serious risk.

Rather than waiting for this weekend’s official London premiere of World War Z Brad decided to pull out all the stops and hold a huge and star-studded screening at Museum of Modern Art in NYC last weekend.

Brad had a stellar line up of guests that came out to catch a first look at the horror film.  Bruce Willis, Morgan Freeman, Oliver Stone, Kevin Bacon, Sting, Trudie Styler, Kyra Sedgwick, Jimmy Fallon and Darren Aronofsky were just a few of the big names that turned out for his personal premiere and the feedback was nothing but positive.

Check out a photo of Brad Pitt at the World War Z movie premiere in New Jersey, CLICK HERE!

Will you be heading to the theater on June 21st to catch World War Z? Are you a fan of the zombie craze? Tell us your thoughts in the comments below!