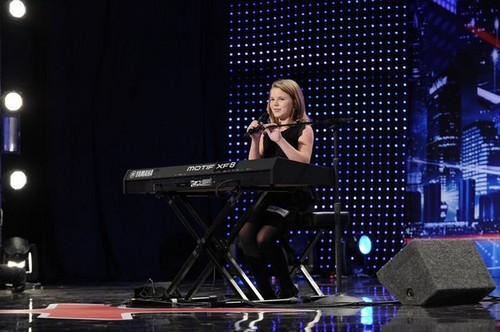 America’s Got Talent returned to television last night with some major changes to the show in place. The judging panel is looking quite a bit different this season as Heidi Klum and Mel B have both been signed to sit beside returning judges, Howard Stern and Howie Mandel.  After 8 seasons with the show, Sharon Osbourne opted not to return and I guess it took not one, but two ladies to fill her shoes.

Heidi has been calling the shots over at Project Runway for years and fully understands the grind of a reality show that is seeking new talent. Mel B has a full resume of experience to bring to the table. She began as a Spice girl, has enjoyed solo artist success and had her own reality show for starters. She’s in a pretty good position to spot an act that might really catch on and work. Both ladies are tough as nails and can hold their own against the often intimidating Howard Stern so the changes may actually work for the show.

As for the talent pool from last night’s show, well, there was a clear cut stand out, ten year old Anna Christine who is already lining herself up to be a serious contender for the season. Her rendition of House of the Rising Son was unbelievably good and the fact that she perfectly played the piano while singing proved that she can multitask. Howard told her that she already has “depth” and that’s something that can never be taught. She is headed with a few others to the Vegas round.

AGT’s live shows will begin on July 23rd and they’ll be coming from the famed Radio City Music Hall this time around. The producers wanted to give the show a new, upgraded home base and by taking it from New Jersey smack into the big apple, AGT is sitting in one of the most entertaining cities in the world. Did you tune in for the premiere last night> What did you think of the new judges? As far as the performances go, who did you like the best? Tell us your thoughts in the comments below!