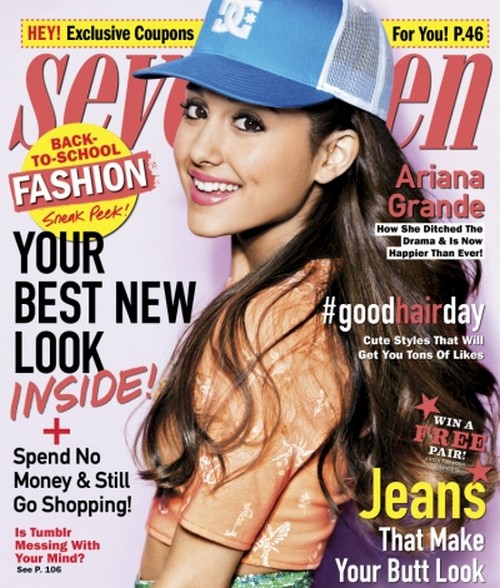 Ariana Grande has finally spoken out about her bitter feud with Victoria Justice, whom she considered one of her closest friends at one point in her life. The two teenagers were both working on Victorious – which was a popular TV-show on Nickelodeon – and though everything seemed cool between the two, their relationship turned sour all of a sudden.

According to Ariana, Victoria – whose name she refuses to use in the quote – was almost a bully in the sense that Grande felt she had to change her looks and behavior in order to please the person she’d have to see on set every single day. If someone doesn’t like you and that person happens to be your co-star, you’d do anything to try and soothe the tension, right?

Well, Ariana tried just that, she explained in the latest issue of Seventeen magazine. The 19-year old shares with the mag that she struggled to find her way back to the person she once was as she so desperately tried to please Victoria who had told her she’d never like her. Being around Justice was almost as if it was dragging all of the fun and friendly person out of her, she continued.“I worked with someone who told me they’d never like me. But for some reason, I just felt like I needed her approval. So I started changing myself to please her. It made me stop being social and friendly. I was so unhappy.” Victoria has of course denied any wrongdoing to her former co-star, yet when Ariana reunited with the entire cast back in February, Vic was a no-show and bailed presumably because of the fact that she can’t stand her rival which is Ariana of course.

Grande has a very successful music career in the work, with her latest single, The Way, already making it into the top 10 charts. The actress/singer confirmed that she’s still working on her album, which is a work in progress for her because she’s a perfectionist, but she’ll eventually get there and can’t wait for people to hear her new sound: “I’m a big perfectionist! I’m trying to channel super-confident women like Alicia Keys,Mariah Carey and Beyonce, because I realized that if you want something, you really have to go for it, just like they do.”