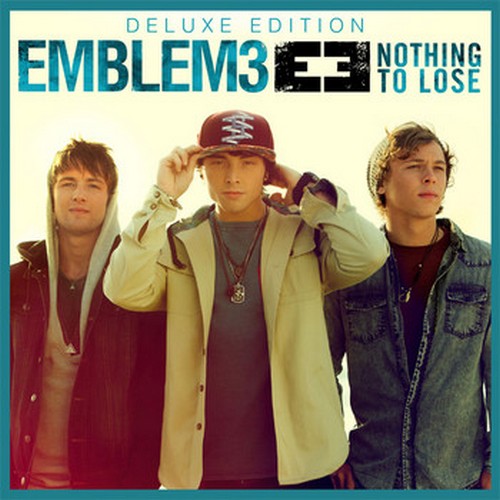 Yesterday proved to be a great day for Emblem3. The boy band that came in fourth place on last seasons’ The X Factor released  the title, cover and track listing of their new album were officially announced in a Sony Music press release. The trios first album album is titled “Nothing to Lose,” and it will have 11 tracks on the regular version and 15 tracks on the deluxe version. (The track listing is at the end of this article. The album’s release date has yet to be announced but it’s expected to be early this summer.

Emblem3 also announced concerts in June and July 2013. After that the group  before the group will be heading out on a major tour, as the opening act for Selena Gomez’s 2013 North American tour.  They will also be presenters at the 2013 Teen Choice Awards in August where they are also nominated. It looks like fourth place has proven to be a real lucky charm for Emblem3. The band is hugely supported by Simon Cowell and it was pretty clear from early on in the X Factor competition last year that he had every intention of making them household names.

Will Emblem3 be as big as Simon’s other band, One Direction? Do you think they are as good or do they have a bit of work to do to catch up with the Brits’ level of talent?  Will Emblem3 skyrocket to worldwide fame this summer? They sure are being given a nice promotional boost, don’t you think? Tell us your thoughts in the comments below!