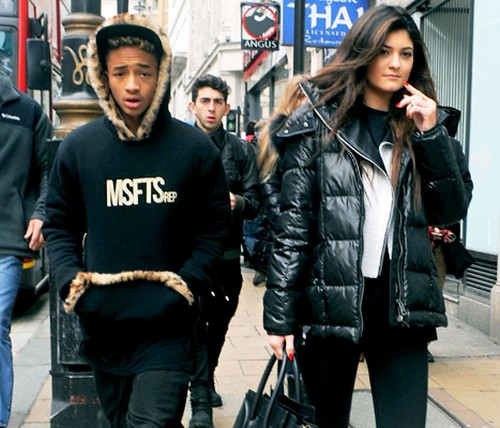 Kylie Jenner and Jaden Smith have confirmed they’re dating (sorta).  The couple who have reportedly being seeing each other since the beginning of the year were spotted out and about in Los Angeles this past week.  They were headed over to a local theater to watch a screening of Brad Pitt’s new movie, World War Z.

As the two left the cinema later that evening, neither of them could care less about what people would say as they reached for each other’s hand and walked out the building. Yup, Kylie and Jaden exited the theater while holding hands,- you wouldn’t do that with someone that’s “just your friend”, would you?

Kylie isn’t shying away from the truth anymore; she doesn’t mind people knowing Jaden is her boyfriend, but still doesn’t want to publicize it like crazy in respect for Jaden and his family – who aren’t that fond of sharing info with the media. Kendall was also given tickets earlier this week to see Justin Bieber live in concert, and guess who she took? Jaden, of course!

They both sat front row as they watch the 19-year old singer perform his latest tracks; the only reason a story came out about Kylie and Jaden at the concert together was because the 15-year old had posted a Keek which showed the two sitting next to each other.

Kylie has been spending a lot of time with Jaden in the last few months; she flew all the way out to London to see Smith perform as JB’s opening act during the UK leg of Justin’s tour, she also attended the New York premiere of After Earth – the infamous movie her boyfriend starred in – and most recently she was seen making her way over to a restaurant, where she was soon joined by J.S.

According to Daily Mail, Jaden had dressed up as Iron Man to disguise himself; he clearly doesn’t want anyone to know that he’s dating Kylie. Maybe he’s just trying to keep his lady fans happy by having them think he’s single. Either way, we like the fact that these two are keeping their private lives to them and not sharing it with the whole world. That’s how we know they are good for each other.