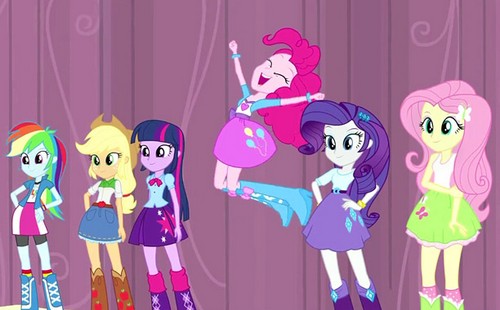 In case you aren’t a huge cartoon fan let me be the first to tell you that the My Little Pony franchise has been going strong since the 1980’s and they are set to release a theatrical film this year entitled My Little Pony: Equestria Girls.  It is written by Meghan McCarthy and based on the animated series My Little Pony: Friendship Is Magic. The animated flick will have its own limited premiere on June 16, 2013 at over 200 movie theaters across the United States. The film will bring to life human versions of the main pony characters from the TV series. It will eventually premiere on Hub Network later this year.

The writers took an interesting angle in deciding to morph the original ponies into high school students but it actually seems to work. Plus this will likely launch the pony brand into a new direction because it leaves room for Equestria Girl follow up films. The newly released trailer pretty much spells out the entire plot of Equestria Girls.  Twilight Sparkle is named a princess and shortly thereafter her all-important crown is stolen by the evil Sunset Shimmer. N order to retrieve her crown Twilight is thrown into a world filled with two-legged characters that kind of remind her of her friends back home.

The love for My Little Pony only seems to grow as the series ages. There’s a whole new crop of fans that call themselves Bronies. The series has also found a cult following amongst middle aged men, not just the typical child demographic! Grown men claim to love the message that is taught by these loving characters and think that those of us in the real world could learn a thing or two!

Are you a Pony fan? Are you anxiously awaiting the premiere of Equestrian Girls? Tell us your thoughts in the comments below!