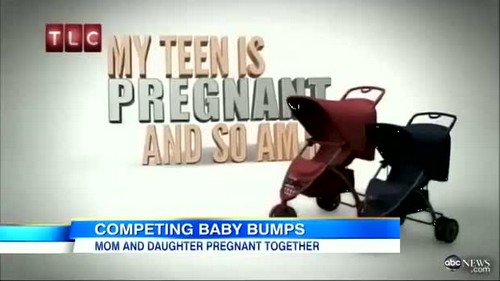 My Teen is Pregnant and So Am I originally began as a one hour special on TLC but because of great audience feedback it has turned into a regular series. See that, networks and producers apparently do listen to what their viewers’ really want to see!  I guess this is an interesting twist on pregnancy and in the 6 new episodes TLC’s viewers will get a glimpse into what happens when normal families find themselves expecting two babies at the same time. I’m guessing a pretty interesting dynamic must emerge between the mothers and their pregnant daughters.

Four pairs have been chosen for the show, starting with Lorna and Chae from York, South Carolina. Lorna has been with her boyfriend Chuck for 11 years and they already have two kids. Lorna has three kids from a previous relationship and at 41 finds herself a lonely stay-at-home mother. Chuck travels for working leaving Lorna with a house full of kids. Chae is 19 and dating a guy who has cheated on her in the past. Lorna thinks that she has picked the worst guy possible to be her baby daddy.

Nicole is 34 and was a teen mom when daughter Mariah, now 16 was born. She is expecting baby number six with a guy that she believes is cheating on her. Mariah on the other hand, is excited to be a mother and believes that this teen pregnancy will somehow improve her life!

Kristi is 42 and was shocked to find out that she is pregnant with a baby girl. She was also furious to find that her 16-year old daughter Kim is in the same boat. Kim was the popular girl at school and Kristi feels like her future is ruined, plus the baby daddy has been MIA for most of the pregnancy.

Lemhele is 34 and was a teen mom herself so she believed that 14-year old Shaniya would learn from her example. Instead they are both expecting babies at the same time. The family is broke and they have no clue how to fit two newborns into their small apartment,. The double pregnancy has ruined their already shaky financial situation.

It sounds like some serious drama will play out between these ladies onscreen. Will you be tuning in to watch My Teen is Pregnant and So Am I ? Tell us your thoughts in the comments below!