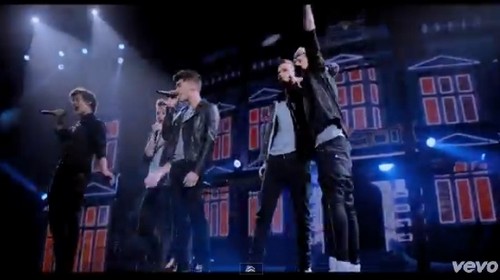 We’re only two months away before One Direction release their concert film, This Is Us, and the teasers just keep on coming. Another sneak peek of what fans could expect from the movie was unveiled yesterday, and let’s just say it looks like the boys are having a jolly good time experiencing all kinds of things around the world.

The film solely focuses on the group as they take on their first world tour, so expect some great coverage of them performing all their latest hits. But that’s not all, as seen in the new trailer, the five are also filmed as they head back to the UK to show their fans where they grew up and what they did before entering the X Factor three years ago.

One particular clip sees Harry Styles return to the bakery he had worked at; possibly his first job. His former co-workers seemed overjoyed by the singer’s presence, seeing that many people probably wouldn’t have thought they would ever see him working in there again, but he did. For a day, at least. Ha.Styles is then greeted to one of the women he used to work with named Barbara, before telling the cameras that she used to slap him on the bum — she then laughed before giving Harry another slap on the buttocks. Other clips in the trailer show the band heading out to Japan and trying to adjust to their culture along with a first look at the boys live in concert!

Sounds like a promising movie that’ll please a lot of fans. But, we do wonder if Justin Bieber’s Never Say Never concert movie has any chance on keeping its number 1 spot as the most-successful one so far. It grossed a total of $100 million worldwide, so that’s going to be hard to beat, but hey… never say never. LOL.