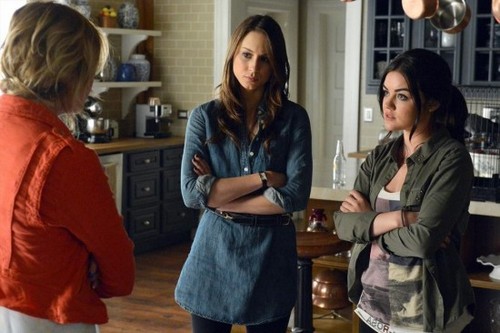 Today is the day, LiArs! Another new episode of ABC’s Family Pretty Little Liars called, “Turn of the Show.”  On last week’s season premiere the Liars were desperate to uncover what new scheme “A” had in store for them in the wake of the lodge fire, and had no choice but to turn to Mona for answers, now that she was also being targeted.

Aria struggled with seeing Ezra in the wake of their breakup, and Emily started to make plans for life after high school.Meanwhile, “A” set Toby on a new path, what’s in the trunk was revealed, and a shocking discovery reverberated through Rosewood.  Did you watch last week’s season 4 premiere?  We did and we recapped it here for you.

On tonight’s show  the official synopsis does not tell us much we see Emily has a bruise on her arm in the promo, so will that stop her from competing and is that someone “A” did?  Not only is Emily in danger but “‘A’ nearly kills the newest member of the club. Aria decides to learn self defense to defend herself against “A.”  Spencer and Toby get into a heated argument and Toby shares a secret with Spencer.