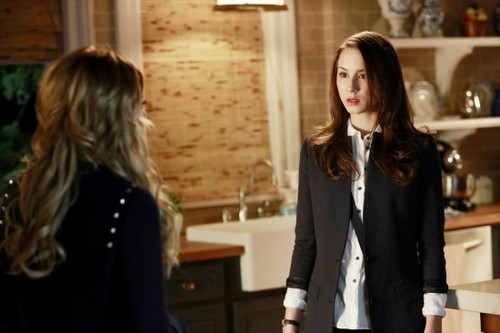 Pretty Little Liars returns to ABC Family tonight with a new episode.  On last week’s episode the official synopsis did not tell us much but we saw Emily had a bruise on her arm in the promo, so will that stop her from competing and is that someone “A” did?  Not only was Emily in danger but “‘A’ nearly killed the newest member of the club.

Aria decided to learn self defense to defend herself against “A.”  Spencer and Toby got into a heated argument and Toby shared a secret with Spencer.  Did you watch last week’s season 4 second episode? We did and we recapped it here for you.

On tonight’s show we will see the introduction of another new police officer.  Detective Linda Tanner, is expected to make her debut on the show tonight.  Caleb and Hannah’s Dad are back on tonight’s episode.  Hannah’s Dad is not going to have good news for Caleb.  It also it looks like Hanna has had enough of “A’s” games.  “A” new target hits close to home.

Spencer, Aria, Hanna, and Emily are going through a box of apparent junk from Allison’s room. Hanna tells everyone her mom is innocent and keeping of moms, Aria’s mom just came into their hangout with her younger boyfriend. The boyfriend wants mom, Ella, to come with him to Austria. Ella tells him she can’t. She does have kids but Zach still wants to convince her.

The liars found a strange mask in the box when their attention suddenly focuses in on Melissa. Who was supposed to have left. Spence goes to talk to her and in a sisterly way of nasty/nice Melissa reveals it might be time for the both of them to leave town.

Hanna is speaking Caleb about his reunion with his dad. Caleb apologized to his dad and his dad forgave in moving on.  Caleb is happy about the situation but Hanna has something on her mind. Caleb knows and reassures her that her mom didn’t kill anyone. Which would have been fine if Hanna didn’t know how much “A” likes to play games.

Spencer wants Toby to tell their friends the truth.  He doesn’t want to just yet. Spencer is willing to help him investigate his mom’s “suicide”. They only way they could truly do some work is to go back to the scene of the crime.

Hanna is still grilling her mom over Ashley supposed trip. Her mom is getting angry; she feels that she already addressed the subject and Hanna needs to let it go.  Ashley gets some flowers at work. When Hannah comes into the office she sees them and comments on it. Ashley says she got it for going to New York but once she leaves the room Hanna reads the card. The note implied Ashley never went to New York.

Earlier Aria called dating Jake, her instructor, nice. However on their date its awkward. As matter of fact Jake is coming of as creepy.

Spence tells her friend the phone number is real it’s just she can’t find any record of it. They want to know more but Spencer has to help Toby. Emily’s mom comes to the school she knows Emily took some of her pills. Emily wants to resist although her mom isn’t having it.

Hanna tells Caleb about her mom. He suggests she talks to an attorney. Hanna goes to the police station to see Emily’s mom and instead she sees a whiteboard with all of her friends and enemies up on it. She can’t take a picture because the new detective comes in. Hanna asks why she’s up there and the detective is saying they’re putting up everyone’s photo while they investigate Wilden’s murder. The detective then excuses himself so he could go over and talk to Melissa.

Caleb goes to Hanna’s dad. He tells him about the situation with former detective Wilden. Mr. Marin says thanks but otherwise appears like nothing happened.

Aria and Emily are looking at the weird mask when Aria notices that face sculpture underneath is replica of Allison’s face. She must have modeled for it. They call in Hanna. They found out where the mask was made and they need to go and see if there’s more Allison Masks out there. Hanna wants to go now. She can’t wait for Spencer because “A” isn’t going to wait either.

They go to the designer. He happens to live creepily off the main road. It’s scary but all three girls do enter the unknown man’s house.

Toby and Spencer are back at the psyche ward. Toby gets caught up in where his mom died. After he relives his mother’s last moments he feels that maybe he was wrong and gave up Mona’s RV for nothing. Spencer looks out the window and begins to have doubts. There is a ledge that wound have stopped his mom from hitting the ground. Something isn’t adding up,

The stranger sculptor is only willing to answer questions if Emily poses for a bust of his. Aria is keeping busy with questions while Hanna is snooping through his storage. They’re leaving the house when Hanna tells them she found something.

Caleb meets up with Mr. Marin.  Ashley had gone to him for money when she was supposed to be in New York.  He didn’t give her any. Caleb wants to know why he didn’t tell him this earlier. Hanna’s dad but Caleb is firmly in love with Hanna so Mr. Marin tells him that his gun is missing.

Emily’s mom, Pam, comes into Emily’s room. She’s angry that Emily left her room but she has more pressing concerns. Social services were called after Pam had nearly gotten rough with her daughter in front of school. The social worker called Emily’s doctor. With Emily’s fresh bruises, there is going to be a full investigation into the family.

Aria is doing her best to get her mom to go with Zach. She assures Ella that she’ll be fine with dad.  Her mom decides to go. Jake has rethinking her decision but Aria knows her mom needs to go.

What did Hanna find in the storage room? She shows it to Spencer. It was a mask of Melissa. Did Melissa go with Allison to get it done?

Hanna returns home. She lets her mom know she’s back and her mom apologizes for snapping at her earlier. Her mom claimed she didn’t Wilden but she is acting suspicious.

Melissa goes in to speak with Spencer. She tells Spencer she was called in for questioning because she was friends with Wilden back in high school. Melissa seems up for conversation and not any chit chat but deep philosophical conversation.

Emily’s dad is coming back. Social services had contacted him. If Emily wants to know how all these things came into play then she could guess its “A”. “A” is the one that has Emily’s x-ray.

What will happen with Emily’s dad? & will Melissa hurt her Spencer or try to protect her? Too many questions at the end. When will there be answers?