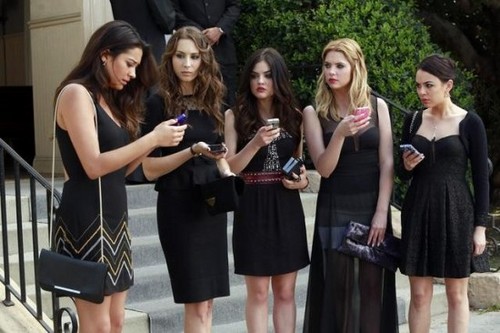 Pretty Little Liars returns to the ABC Family with  their season 4 premiere.  To catch up where we left off at the end of season 3 the Liars were seeing red as they attempted to put an end to the game.   Spencer was back home and presented a good front, but Aria, Hanna and Emily are not so sure their friend is fully back after seeing how fragile she was just a day or so before.

Unfortunately the girls didn’t have much time to ponder Spencer’s health as shocking revelations were brought to the forefront.  Did you watch the season 3 finale to get caught up?  We did and we recapped it here for you.

In the season four premiere, titled “A is for A-l-i-v-e,” the Liars are desperate to uncover what new scheme “A” has in store for them in the wake of the lodge fire, and have no choice but to turn to Mona for answers, now that she is also being targeted. Aria struggles with seeing Ezra in the wake of their breakup, and Emily starts to make plans for life after high school.Meanwhile, “A” sets Toby on a new path, what’s in the trunk is revealed, and a shocking discovery reverberates through Rosewood.