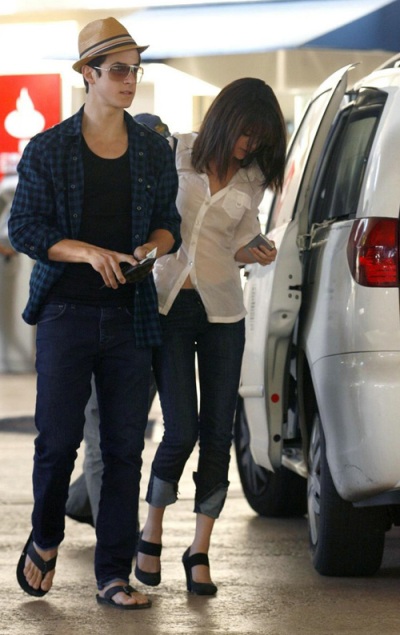 After Selena Gomez and Justin Bieber broke up [for the fiftieth time this month], it was rumored that Selena was moving on with her Wizards of Waverly Place co-star David Henrie. They two have been spotted together several times over the last few weeks, and there are reports that they have started dating after years of knowing each other.

However, a source close to Selena and David tells Hollywood Life that the two are still only friends, although there is a possibility of romance in the future. The source explains, “They are not dating. They are just friends, currently. They spent a good portion of their life together and are great friends and they don’t want to or have not even thought about ruining it with dating.”

When discussing the future, the source adds, “Well it worked for Mila [Kunis] and Ashton [Kutcher] years after, didn’t it? But let’s just say that it would be a surprise, even to them, if that happened.”

I’m sure that’s what people used to say about Mila and Ashton, so I’d say let’s wait before jumping to conclusions. Selena and David are extremely close, true, but they also have a great chemistry and a strong foundation of friendship. It will be interesting to see which rumors end up being correct in the long run.