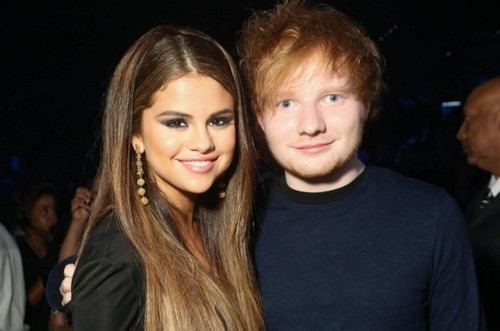 It looks like Selena Gomez is definitely over Justin Bieber. The 20-year is reportedly dating British singer Ed Sheeran after being introduced by Taylor Swift at an event earlier this year which eventually led to a relationship between the two.

Sheeran, who was rumored to be in love with Taylor at one point, has been paying several visits to Selena’s home in Los Angeles ever since the two became a pair, several news outlets have reported. In fact, the 22-year old was last seen at her house just days ago… and he brand a guitar, so they’re probably making sweet music while smooching their faces off! Haha.

Ed is said to be head over heels in love with Selena; he really cares for her and wants her to be happy, and if she says she wants him too, then why not become a couple? The singer is aware that Gomez just came out of a very public relationship to Justin, which had her stay away from the boys until she felt like she was able to trust one again, and she seems to have made a right choice by picking Mr. Sheeran.

An insider explained the couple’s relationship: “They are hooking up! She got sick of having to take care of Justin like he was her child. This is a nice escape from the drama. They are friends with an open mind. He’s sensitive and sweet and a lot deeper than Justin,” before adding that this is in no way an attempt to make Bieber jealous.

Do we doubt it?! NO! We’ve seen the couple at several events together and the fact that there are dozens of pictures of him leaving her house constantly just gives us the evidence we need to validate this story by saying it’s definitely true! What a lovely couple they are; a former Disney starlet turned singer and a talented songwriter/musician. Perfect combo!

Madonna’s Daughter Lourdes Has Major PDA With Her Boyfriend In Front Of Her – Inappropriate?