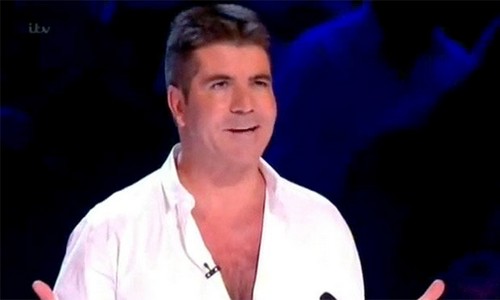 I suspect a lot of people lived vicariously through Natalie Hunt last night. The young woman was a back up singer in the season finale of Britain’s Got Talent last night and as her friends continued to perform an opera piece she stepped to the front of the stage and egged Simon Cowell.  She didn’t get to throw too many before being removed from the stage, but in those few seconds she made a lasting impression.

Natalie later apologized for the incident saying, “I want to apologize to Richard and Adam for overshadowing their performance. I’ve never done anything like this before and in hindsight I have realized it was a silly thing to do.”

The police were called but ultimately no charges were filed. Think about the multitude of bad singers (and even some decent ones) who would love to have had the nerve to do what Natalie did. I realize security must be pretty tight but over the years Simon has pissed off a lot of people with his cut throat remarks. It was only a matter of time before someone finally acted out.

Simon must also feel like he has dodged some proverbial bullets over the years. This is a man who has no filter but he has to know that the flip side to hurting people is looking over your shoulder even when you are being nice. Simon is probably as surprised as I am that something like this didn’t happen sooner! Did he deserve to get hit with a few eggs on live television?  Do you think that even Simon realizes this incident has been a long time in coming? Tell us your thoughts in the comments below!