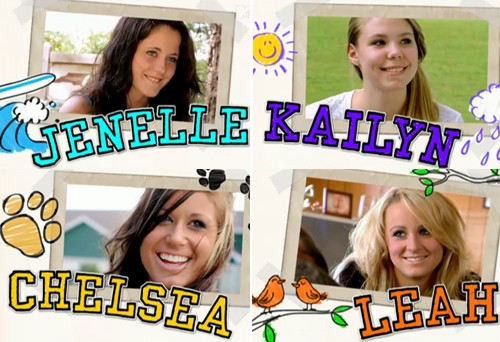 Remember all of those rumors not too long ago that because of Jenelle Evans‘ continuously bad behavior Teen Mom 2 was getting axed from MTV’s line up?  Yeah, well scratch that idea. For a split second it seemed like the former music network had developed a conscience and decided not to toss already screwed up teens into the limelight, but nope. Instead a fifth season has begun filming and some of the most troubled girls around will be finding their way back to the small screen later this year.

According to a source close to the show, all four of the girls will be returning. Leah’s new husband, Jeremy Calvert just tweeted the other day about needing a new bed stat. He put it all out there and mentioned that MTV crews will be coming in to film soon and they need a bed to sleep on, at least on camera.

Jenelle Evans was also spotted at a North Carolina restaurant having lunch with her mother, Barbara and new boyfriend. MTV’s camera crew was there filming their meal and supposedly Chelsea Houska is supposed to begin shooting next week. It’s pretty obvious that MTV is loving the crazy amount of attention that this cast of bad girls brings to their network.

Are you glad that the show will be returning or are you sick to death of the drama that surrounds Jenelle especially?  Is MTV doing them any favors by handing them more money and putting them in millions of homes each week for another season? I’m thinking no. Tell us your thoughts in the comments below!