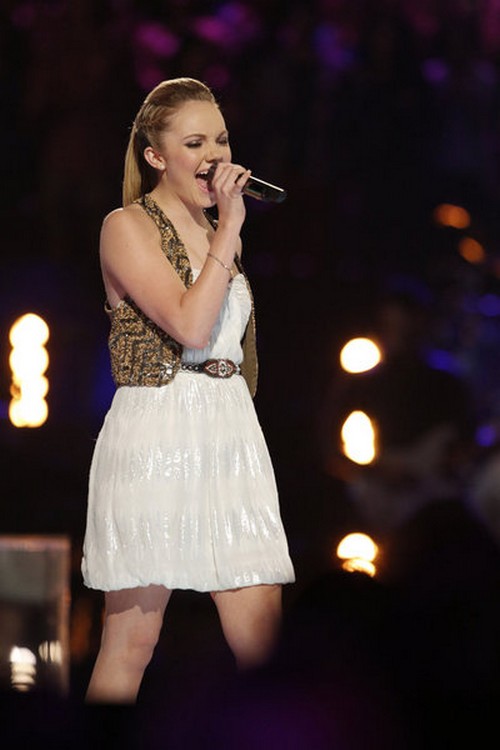 Singing Taylor Swift songs on The Voice has really paid off for Danielle Bradbery who has now signed her first recording contract with Big Machine Records – the same company that Taylor happens to be signed to. How cool is that?

The 16-year old, who was crowned the show’s winner on Tuesday evening, is extremely excited and can’t wait when she starts recording her debut album next week! The Texas-born starlet isn’t wasting no time as her first original single is also expected to drop later this year.

Since Taylor writes her songs about her past relationships and break-ups, Danielle may probably take the same approach by writing songs about her life; remember how she got all teary-eyed when she said she had been bullied in schools due to her appearance. Well, those bullies aren’t the ones with a big contract under their belt.The Voice’s coach Blake Shelton seemed beyond happy for the youngster that he mentored throughout the competition, after the news broke Bradbery had officially inked the deal. He seemed to be in shock when he said: “Holy s**t balls!!!! I love y’all!!!!!! Congrats @DBradbery !!!!,” before adding “Still [so] excited for @DBradbery!!!! Great job girl.”

Danielle now has a bigger chance on recording a duet with her idol, which we think is DEFINITELY going to happen. FYI: Some of the biggest country artists are signed with Big Machine Records: Tim McGraw, Rascal Flatts and of course The Cadillac Three. Congratulations again, and let’s make this Taylor Swift collaboration happen — we hear she’s also back in the studio to record a couple of songs for her next album.