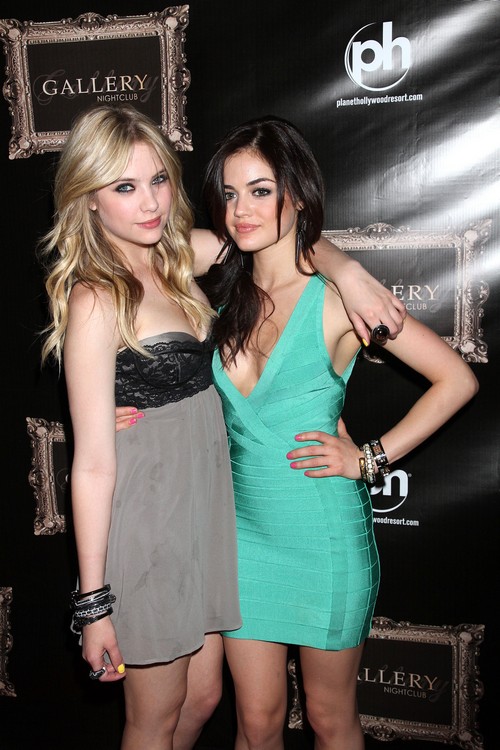 Pretty Little Liars is one of the hottest teen shows around right now. Based on the book series by the same name, ABC Family’s PLL is helping to heat up the summer small screen in a big way. Up until now all of the rumblings from the set made it sound like it’s a pretty big love-in with all of the cast just thrilled to be working together. Recently however, we’re hearing that Lucy Hale is not so happy with some of the storyline choices.

According to the July 22nd print edition of Star magazine, Shay Mitchell’s character Emily Fields is now the center piece of PLL’s and she is getting the best stuff to act out and the most screen time. Lucy is rumored to be furious, as she was originally brought in as the star of the show. She supposedly was a big drama queen backstage at the MuchMusic Awards last month in Canada. Shay is Canadian so of course her home country is going to go nuts over her success but Lucy just fumed the whole time and her supposed bad attitude is really leaving a sour taste on set.Of course after the accusations were first lobbied, Lucy came out swinging insisting that she gets along just fine with Shay and that contrary to some of the more heated rumors, she has no intention of quitting the show that has ultimately made her a star.

Let’s be real here. Girls fight, especially when they have a shared goal. It’s certainly possible that in this big cast full of women, a few can’t stand the sight of each other! Will it cause them to leave the show though? Can you imagine Lucy leaving the show that made her a star so early in its run? Moving on is usually a great idea but in the past if an actress leaves too quickly it doesn’t always lead to bigger and better things. Hello, Mischa Barton?

Do you think there is really drama between Lucy and Shay? Tell us your thoughts in the comments below!