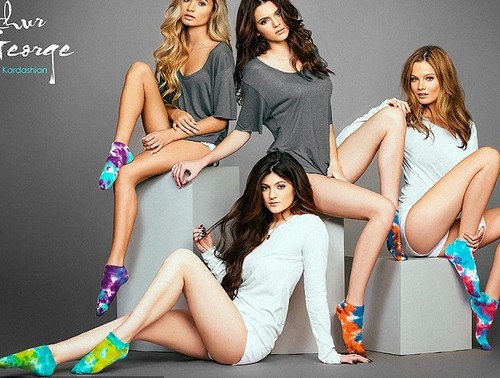 In another attempt to promote his own brand, Rob Kardashian has received the support of his friends and family as they model his Arthur George sock line. In the just-released promotional shots, Kendall Jenner, Kylie Jenner and a bunch of close pals can be seen wearing the colorful socks as Rob gears up for a worldwide release.

According to reports, Rob’s line has been doing very well nationwide,- fans of the reality star seem very much interested in purchasing items from his line, and this is only the beginning for him. The 26-year old still wants to branch out and start designing trainers, shirts and trousers in the near future, but let’s take one step at a time shall we, Rob? LOL.The prices of these particular socks are not cheap either, they range from anywhere between $14 to $27 which is not exactly in many people’s prince range.  But when you’re a die-hard Kardashian fan, you’d splash any amounts of cash on their products… even when it’s something no one will even see. Let’s face it… who actually looks at what socks we wear?

Kendall and Kylie are very supportive of Rob though. They took time out of their work schedule to model the new range of socks. It’s unclear whether or not the new designs are specifically designed for women, but by the look of the colors, that seems to be the case.

Rob is very likely to sign a partnership with Sears to have his socks sold in their retail stores, while other worldwide deals are soon to follow. He’s doing well for himself and keeping himself busy — it’s better than playing video games all day, right? Besides, we’re sure Kris Jenner is really putting her foot down and helping her son pursue his dreams now that Kim Kardashian is off for the next few months while she tries to get used to motherhood.