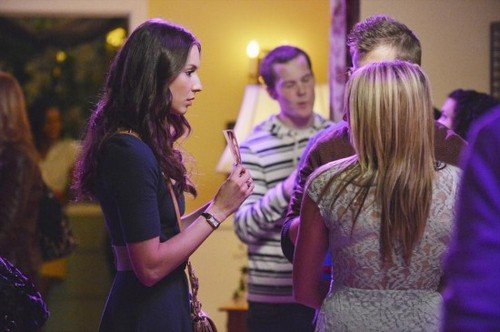 Pretty Little Liars returns to ABC Family tonight with a new episode.  On last week’s episode Holbrook’s partner, Lt. Tanner, cames to town, intensifying their investigation into the Liars and their possible connection to Wilden’s death. Emily panicked when her parents came under undue scrutiny due to “A’s” manipulations.

Hanna bristled when Caleb tried to help her through this latest crisis, and tried to shift the focus of the police investigation. And Toby found a new source of information into his mother’s death, but it only led to more questions.  Did you watch last week’s season 4 fifth episode? We did and we recapped it here for you.

On tonight’s show Spencer and Emily make plans to visit a nearby college, but they have very different agendas for their time spent on campus. Spencer’s singular focus in figuring out Ali’s apparent connection to the school contradicts Emily’s real fears about her plans for after she graduates. And after a stinging attack by “A”, Aria and her brother Mike don’t see eye to eye regarding what’s best for their parents.