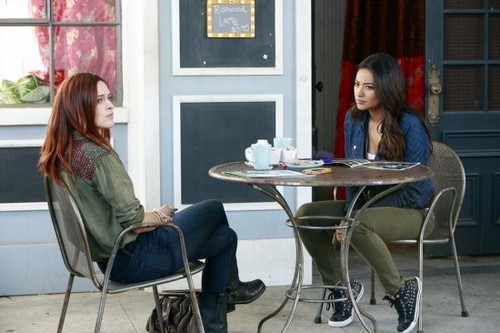 Pretty Little Liars returns to the ABC Family with a new episode tonight called, “The Guilty Girl’s Handbook.”  On last week’s episode Caleb and Toby teamed up to investigate “A” and what really happened the night of the lodge fire and encountered a source that points to a new possible identity for “Red Coat.” Hanna struggled to act like everything is normal and her friends were unsure about how to help her.

Aria worried about Mike’s behavior in light of an incident at school and Ezra struggled with how he now fits into her life. Meanwhile, The Liars were determined to find a new suspect in Wilden’s murder and their tactics have unintended consequences. And, “A’s” new plan threatened to send everything crashing down around one of the Liars.  Did you watch last week’s season 4 fifth episode? We did and we recapped it here for you.

On tonight’s show Hanna comes up with a desperate plan to save her mother from a conviction and turns to the only person she thinks can help – Mona. Caleb tries to convince her Mona can’t be trusted, causing Mona to prove her loyalty in the most unexpected way.  Meanwhile, “A’s” recent machinations take their toll on Emily and her mom, driving Emily to reconnect with her old boss Zoe (Rumer Willis) to look for an escape.