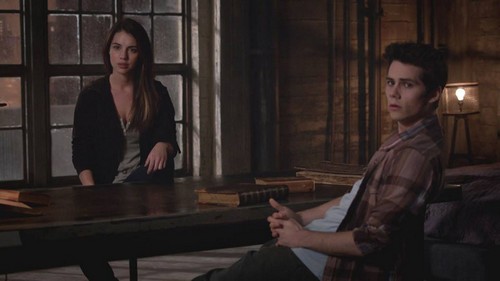 Teen Wolf returns to MTV with a new episode tonight called, “Visionary.”  On last week’s show Allison and Scott shared an intense moment while hiding from Mr. Argent.  This is the closest Allison and Scott have been in months and it looked like the two might kiss.

Why were they hiding? Well, Allison was snooping around in Mr. Agent’s drawers and found something. It looked as if Scott comes over to help with her investigation and Mr. Argent came home early — so they had to hide from the big bad Argent!  Did you watch last week’s episode? We did and we recapped it here for you.On tonight’s show we are going to get a glimpse into Derek’s past. It’s going to be revealed that Derek used to be a lot different when he was younger.  Scott will be told that he can’t beat the crazy Alpha wolves.

Tonight’s season 3 episode 8 is going to be an exciting one that you won’t want to miss, so be sure to tune in for our live coverage of MTV’s Teen Wolf at 10 PM EST!