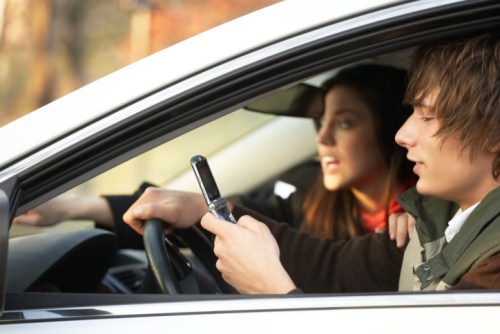 I’m sure you’ve heard your mom say a thousand times “no texting while driving” or maybe a teacher was the one who told you how horrible it is. But time and time again you think to yourself, ‘ I can text, I can watch the road, one text never hurt anyone’ or ‘I do it all the time and I’ve never been in an accident’. I’ve got a few statics for you that are likely to make you consider your texting and driving.

You’re on your way to the mall to meet up with a few girlfriends of yours. You decide to send a message to them letting them know that you’re on your way. You dig your phone out of your purse and unlock the main screen, all very careful to not look away from the road. So you look down, just for a few seconds to open your messages. Did you know that if you’re traveling at 55mph and look down for simply just 5 seconds you’ve gone the entire length of a football field? Pretty scary thought what can happen in the length of a football field.

Chances are most of your friends own a cell phone, in fact 82% of teenagers do. That’s a pretty high number. Did you know that 34% of teens have openly admit they’ve texted and driven at the same time? That’s a pretty high number considering that number should be 0%. Let’s think of this from a different perspective. Let’s say you are a very good driver and you make sure you obey the laws on texting and driving and you don’t text and drive; how do you know that the teen next to you isn’t texting while driving? Obviously you can’t control the people around you but just think if we could bring awareness to how dangerous it was to text in drive. Here’s another statistic to consider: 55% of teens actually think it’s easy to text and drive. 77% of teens think it’s somewhat easy to text and drive. That confidence is deadly, literally. You’ve likely also been in a car with one of your friends texting while driving. I urge you to put an end to that. Tell your friends you won’t travel with them if they’re going to text and drive- even if that means you getting left at the mall and calling mom for a ride home, will you be a “dork”, probably, but better a “dork” then dead. Right?

Here’s a few final numbers for you to think about: in 2011 there were 1.3 million car crashes that were the result of texting while driving. There are approximately 193 million drivers in the United States. Considering those numbers you have a 1 and 148 chance of being in a cell phone related car accident. That’s a super scary number. If you live in a populated area you’re likely to pass 148 other drivers in a matter of minutes while driving. Help bring those odds down by NOT texting while driving. Also, know your state’s laws. 32 states prohibit novice (teen) drivers from using a cell phone at all during driving. Don’t find out the hard way by getting a ticket (or worse!) that you’re state completely prohibits cell phone usage while driving.

Oh and teens, I officially give you permission to share all this information with any adult you ever see texting and driving. The next time you’re in the car with an adult who is texting and driving just tell them that they have a 1 and 148 chance of causing a cell phone related accident. It’s not okay for anyone to text while driving regardless of age, experience or any other stupid excuse they give you why it’s “okay”.