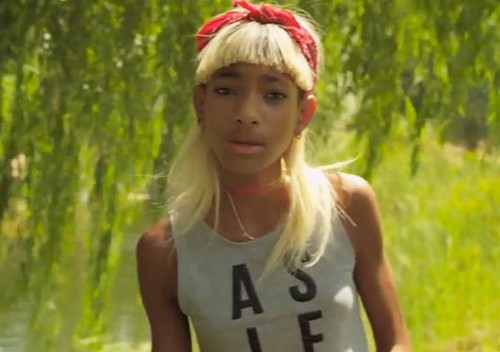 Willow Smith has unveiled a new music video for the song Summer Fling. The 12-year old has teamed up with top producer Fabrega on some new music material which could potentially see her record an entire album with a release date by next year, but for now, we should enjoy the fact that Willow has actually given music another shot.

Earlier this year, her dad Will Smith admitted to having pushed his daughter too much into a career she wasn’t ready for, admitting that it wasn’t until Willow told him she couldn’t cope with the pressure of fame at the age of eleven that he backed off.

Things have definitely changed though, because now she’s back on the scene and the music is just as good as before her hiatus. Following the success of her single Whip My Hair, this track is more of a feel-good song for the summer, hence the title Summer Fling; it has the David Guetta sound to it and even sees cameos from the youngster’s best friends.Not only that, in the video we also see Willow break out in an English accent whilst her pals push each other in the swimming pool before drying themselves off as they start a campfire. For some reason, Willow really reminds us of a younger Rihanna; she’s very opinionated and seems like a free spirit. We do hope that she keeps up with the music scene this time around because this track is really good, but of course if the pressure does get too much again, don’t push yourself — you’re only twelve.