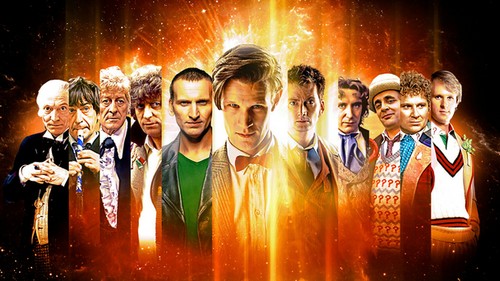 Can you believe that Doctor Who has been on the air for 50 years? Me neither. I mean I remember the creepy music from it when I was a little kid  but even still, 50 years is unimaginable. The anniversary is going to bring a few different incarnations of the doctor together as Matt Smith’s doctor number 11 will  be joined by number 11, played by David Tennant. There’s also an in-between doctor portrayed by John Hurt for The Time Wars and this whole encounter has often been referenced on the show but never really explored until this special episode. What we know is that whatever happens here causes the demise of number 11 and his regeneration in the form of Peter Capaldi.

Each time that the doctor regenerates we find that the character and his focus shift a little. Number ten was more aggressive and dark, suffering a lot and losing a lot. When 11 stepped in he was more about saving people and doing good, basically thinking outside of himself. While we still don’t know the details of the anniversary episode, Capaldi is an older actor that no doubt will spin the character in yet another direction. Whatever he goes through will likely bring back another hardened version of the doctor.Dr. Who is thought to be one of the most coveted roles in Britain and Capaldi is totally looking forward to taking it on. He said on BBC America earlier today “Being asked to play The Doctor is an amazing privilege. Like the Doctor himself I find myself in a state of utter terror and delight. I can’t wait to get started.”

Will you be watching as Capaldi takes over and takes Doctor Who in a new direction? Tell us your thoughts in the comments below!