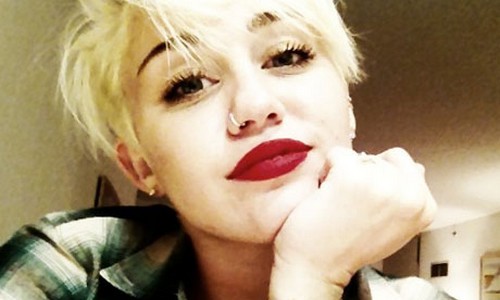 Miley Cyrus  no longer wants short hair. She was willing to rock it back when she was a trendsetter but now that so many have begun to follow her, she’s thinking of going back to long. I blame Beyonce. We all know Beyonce cut her hair so she wouldn’t be trapped in  a fan again but she went pixie cut. Even though she eventually went back to longer hair by getting a bob, it’s too late. Once Beyonce has done everyone else would have been consider copy cats.

“I’m secretly tugging on it every night and taking Viviscal,” Cyrus said, name dropping the hair-growth vitamin supplement. ‘”I’m not going to lie. But I’m going to rock it while I have it.”

As if we wouldn’t have noticed her wearing a wig. She has to rock not if and /or buts. If she put in extensions we would have said something. If she wore a hat for months on end, we would have said something. I’m sorry Miley there is no fooling anyone. This is jus another one of your identity crisis and frankly it’s getting tiring. Pick what you’re comfortable instead of trying to emulate another persona.

F.Y.I though I’m glad she growing out her hair. I always liked when it was long. Now that’s its short she’s only ever styled one way.