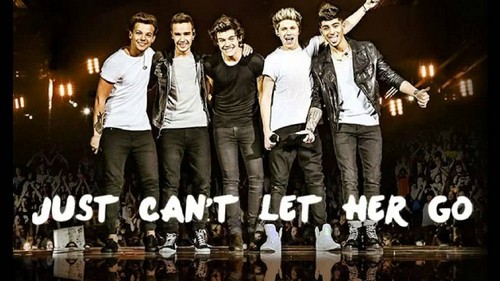 One Direction’s single “Just Can’t Let Her Go” was leaked a while ago but has anyone listened to the cleaned up copy. There saying the boy band is moving away from the slow love songs and giving more upbeat dance floor material. To the person who  started that particular rumor if the band is singing about a girl then it’s all love songs.

I figured that the band would want to start taking a more adult approach in order to stay current you know instead of singing the sickly sweet love songs till they’re 40 like those that shall not be named but is it wise to change your formula now ? They are still new to the game.

In truth fans probably won’t get upset. For some reason I can’t imagine the girl that threw her shoe at Harry just so it could be onstage with him is suddenly going to drop the group once they take a more adult tone. As they grow up so will she. Admittedly many parents will try to hide songs with lyrics like these: “She’s so mean but I kind of love it, and I just can’t let her go, / I’m so whipped, a tiny little, she’s a sexy animal, / Spends too much and I never tell her no, / Drives me nuts and she got me by the throat, / And she’s so mean but I just can’t let her go,” But at the end of the day if Justin Timberlake could keep his fans then so will 1D.

Search for the Hero inside Yourself