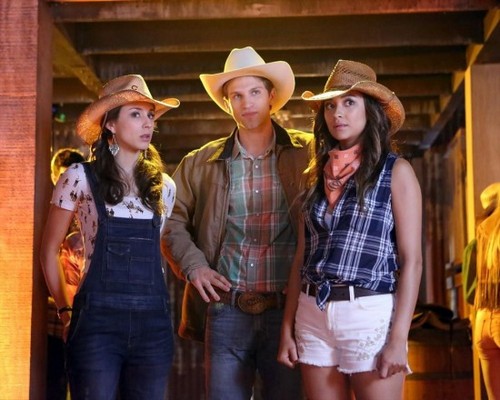 Tonight our favorite show Pretty Little Liars returns with a whole new episode called, “Bring Down the Hoe.”  On last week’s episode still living at a motel, Emily was taken aback when Mrs. Dilaurentis offered to let her move into Ali’s old room and was even more distraught when the other Liars insisted she take Mrs. D up on her offer.

Hanna exploded when it appeared her mother’s recent good fortune had taken a turn for the worse. And Ezra continued to reel from Maggie’s big news when he’s dealt an even more crushing blow regarding his son.  Did you watch last week’s season 4 eighth episode? We did and we recapped it here for you.

On tonight’s show After uncovering recent evidence that suggest “A” is hiding out closer than they realized, the Liars step up their investigation into their most recent suspect. Hanna continues to crumble due to her new found infamy as the daughter of a murder suspect. To complicate matters, Hanna is being stalked by fellow student Travis (Luke Kleintank), until she learns he is hiding a secret that may change her life.

Britney Spears Put Up A Mysterious Countdown Clock Up on Her Website – What Could it mean?