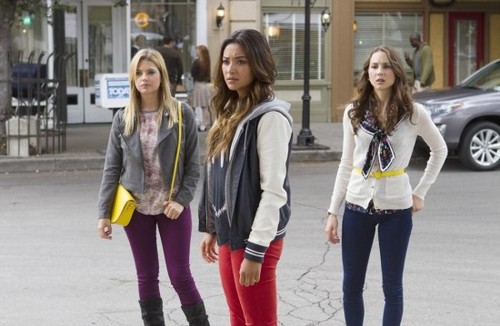 Pretty Little Liars returns to the ABC Family with the season 4 summer finale, “Now You See Me, Now You Don’t.”  On last week’s episode after uncovering recent evidence that suggest “A” was hiding out closer than they realized, the Liars stepped up their investigation into their most recent suspect.

Hanna continued to crumble due to her newfound infamy as the daughter of a murder suspect. To complicate matters, Hanna was being stalked by fellow student Travis (Luke Kleintank), until she learned he was hiding a secret that may change her life.  Did you watch last week’s season 4 eighth episode? We did and we recapped it here for you.

On tonight’s show an intriguing riddle from “A” has the Liars hitting the road and heading to Ravenswood, where they are surrounded by some familiar faces. During a very special magic show, one Liar pulls a disappearing act, leaving the other three scrambling to make sure she hasn’t succumbed to “A’s” tricks. But before they can hightail it out of Ravenswood, they make a shocking discovery that proves that everything they thought they knew about “A” and the “A” team might be wrong. With this discovery, the Liars may just have started “World War A”– #WorldWarA.