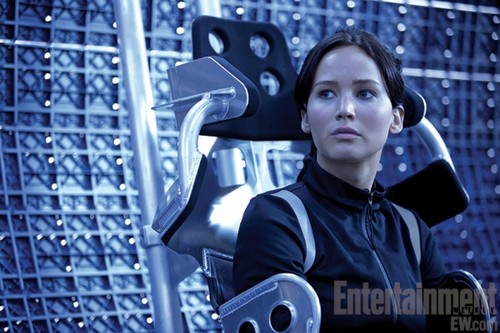 In our newest international trailer for the upcoming Hunger Games movie, Catching Fire we get to see a little but more with what’s been happening with our girl Katniss Everdeen (Jennifer Lawrence) and Peeta Mellark (Josh Hutcherson). We left them as triumphant victors in the last movie but there appeared to be some confusion between the two.

For one Peeta thought their feelings were real. He tells Katniss he cannot go on ignore her in private and then pretending their relationship is real to the public.  Meanwhile Katniss wasn’t sure if loved him or childhood friend, Gale.  Fortunately, the new trailer although informative does not clear up the romantic triangle.

The movie’s official synopsis is Katniss Everdeen and Peeta Mellark become targets of the Capitol after their victory in the 74th Hunger Games sparks a rebellion in the Districts of Panem. So instead unraveling the tangles our victors are in now there focus must be on the Capitol and the game.

That’s right the game. Even though the rules clearly implied in the last film that no victors can reenter the field the rules have been suspended for the 75th anniversary of the Hunger Games. That means former district winner who thought they would have nothing but an easy life from now on are suddenly dragged back in to a fight to the death. Also they probably figured out that Katnis and Peeta are the ones to blame.

Look out you guys. The odds are no longer in your favor. The President wants them dead and he just might succeed this time, or will he?