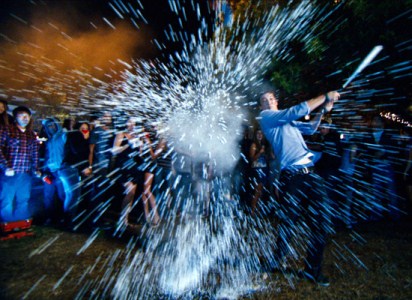 You’re at a party with your peeps. It’s an all night rager with drunken wannabes falling into the swimming pool, busty blondes posing like Deal or No Deal models, and friends and foes hanging on one another’s shoulders. It’s like Project X, just cooler and more real. Before long, you’re approached by a scary looking dude who smells like glue and fear. He hands you something and says, “Wanna drop some?” You half-smile and dry swallow the tablet he handed you, because you’ve always wanted to try it, plus your friends will think you’re a loser for not joining in on the fun.

Several hours later, you’re dancing to Dubstep with a sweaty brunette. You’re thirsty. Your mouth feels like cotton on a hot summer’s day. Your heart is beating really hard and fast, so you swallow some more alcohol to quench your thirst. You’re not scared, though, because never before have you felt this alive. The night draws to a close when the sun arrives over the horizon like a firestorm. You fall asleep and drift away peacefully.

This is how the story should go when taking drugs. However, it’s never this cool, nor this peaceful. One always believes the experience will take you away from your everyday life and force you to experience a hypo-manic euphoria. Your wounds would magically be healed and your damaged existence will become whole again. There will be no pain, no fear, no anxiety, no loneliness, and no rejection. Unfortunately, this is never how it actually goes down. The above-described case actually did not end with a fairytale sunrise. Instead, the 15-year-old girl who took the ecstasy died shortly thereafter from a fatal overdose.

Isobel Jones-Reilly discovered ecstasy in her university lecturer’s stash during a house party. She asked her friends not to phone an ambulance out of fear of getting in trouble, but when an ambulance eventually arrived on scene, Reilly received eight shots of adrenaline and 28 cycles of CPR on her way to the hospital. It did not work, and she died a few hours later.

This is the cold, stark reality of taking drugs. Yes, it might seem cool to pop a pill or two when you head to that popular boy’s house party, but it won’t be cool when you’re lying dead in a ditch. The far-reaching effects of drugs influence and destroy lives at a rapid rate. Films like the above mentioned Project X glorify the usage of drugs, but it’s never like that in reality. You won’t experience a sudden upsurge in popularity by popping a few pills and/or snorting a line or two, nor would you experience a spiritual epiphany and indefinite forgiveness.

Drugs don’t turn you into Superman; you do. You have all the weapons you need to become the coolest person on the planet, without using drugs and alternate realities to obtain it. In the famous last words of an anonymous drug addict, “I won’t get hooked by doing it once! I am able to control myself!”

Don’t be the fool who needs to get high to cope. Say no to drugs.