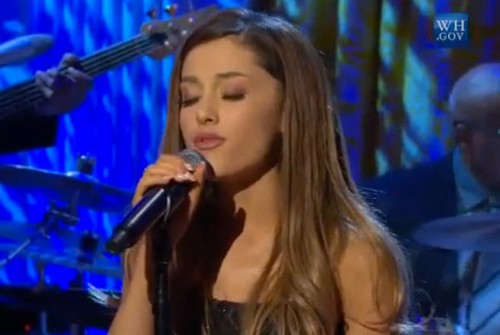 Ironically the same week that Ariana Grande’s “Sam and Cat” costar Jennette McCurdy found herself in a nearly nude photo scandal mess, Ariana was doing her thing and singing for President Obama. It’s good to know that not every Nickelodeon and Disney star is evolving into a hot mess.

Thursday night Ariana Grande joined high-profile singers Patti LaBelle, Janelle Monae, Jill Scott, Aretha Franklin, Melissa Etheridge and Tessanne Chin (The 2013 Voice Champion), to perform at the Women of Soul: Performance at the White House. Ariana chose to sing the classic Whitney Houston song, “I Have Nothing” for President Obama and his wife Michelle. And, general consensus seems to be that the little pint-sized Nickelodeon star killed it. Patti Labelle even took to Twitter after Ariana’s rendition of Whitney’s song and praised her for her performance tweeting, “@ArianaGrande I love you back Baby Girl and keep doing what you’re doing because you’re fierce! XOXO!”

Ariana recently made headlines a few weeks ago when photos were released of her dancing with Chris brown. The duo is rumored to be working on song together that is scheduled to be released sometime this month. After Chris brown emerged from rehab last month he tweeted, “I dug a single seed into the ground I hope it grows,” and Ariana tweeted back, “in a year or two if you’re around you’ll see a rose.” A fan asked Ariana if those were lyrics to a song, and Ariana replied it was a song that will be coming out in March.
Check out Ariana’s White House performance, and let us know if you think she nailed it in the comment section below.