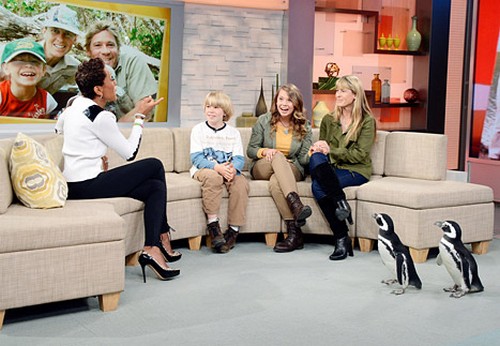 In what the People for the Ethical Treatment of Animals (PETA) calls a hypocritical move, Bindi Irwin, the 15-year-old daughter of famed crocodile hunter Steve Irwin, has partnered with SeaWorld in a joint initiative called Generation Nature which encourages children to help preserve wildlife.

SeaWorld has been the focal point of claims of abuse and exploitation by PETA for quite some time, and has recently received backlash after the hit documentary Blackfish highlights what happens when a killer whale is confined to a small space for entertainment purposes.  PETA shared with toofab, “The Irwin family has been exploiting animals for years, so it comes as no surprise that Bindi has agreed to become SeaWorld’s latest shill. But plastering her face on SeaWorld’s website won’t cover up the fact that orcas, dolphins, and other animals are suffering in SeaWorld’s tiny tanks after being ripped from their families.”  They go on, “Bindi’s talk-show appearances are just a flimsy last-ditch effort by an abusement park hoping to make a buck.”

Performers such as Trisha Yearwood and REO Speedwagon have cancelled planned shows in the park, choosing not to be associated with the controversial theme-park. Bindi talked with Robin Roberts this morning and shared how excited she is about the new joint initiative.  I don’t think this is the last we’ll hear from PETA on Generation Nature.  Tell us what you think! Are you Team Sea World or Team Bindi?

Giving Thanks On Thanksgiving: Creative Ways For Teens To “Give Back”…