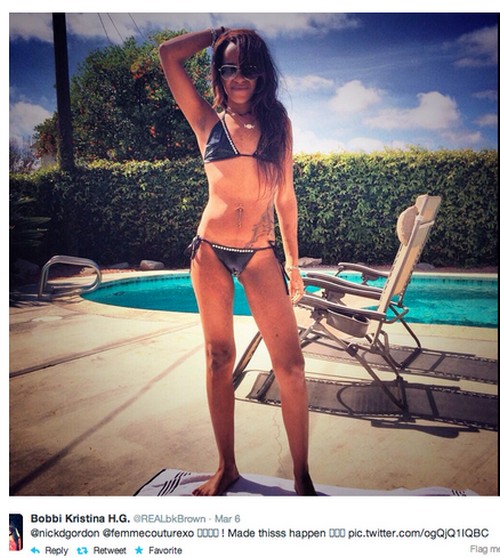 Was it stress, insecurity, or drugs that contributed to the extreme, rapid weight loss of Bobbi Kristina Brown, daughter of the last Whitney Houston, and wife of Nick Gordon? Bobbi Kristina, who just turned 21, has had such a tumultuous upbringing and life that any of the above factors could have easily been the source for her shocking weight loss, which she proudly shared with fans via Twitter as she posted in a tiny black bikini and dark glasses.

Bobbi Kristina is still very insecure about Nick. Though they reportedly married recently, they’ve had a roller coaster romance with Nick actually ending their relationship at one point to pursue other options. It seemed very clear, as documented on the short-lived reality series, The Houston’s: On Our Own where the two starred, that Nick didn’t feel as strongly about Bobbi Kris as she felt about him. She has constantly fought for their relationship and had it out with family members time and time again for him. And while the famous daughter of the legendary Houston says she trust’s her man’s intentions completely, she is hiding her fear that his critics will be right, and that she will come to find he is using her for the fortune she is to inherit from her mother’s estate. She worries, too, that now that Nick has developed his own fans, the temptations of another woman may cause him to stray. Her insecurities may have led her to lose a significant amount of weight to please her new hubby.

Bobbi Kris is also launching a music career. Naturally, as the daughter of a legendary, beautiful singer, she has big shoes to fill, knowing all eyes and ears will be perched and ready for the release of her first single.  She has also had to deal with the stress of her family interfering in her life. She hates the way the family treats Nick and stresses that the family will push him away from her. She feels secure with him and is scared to lose him. Unreasonably scared.

As a young girl, Bobbi Kris was exposed to all kinds of drugs as both parents battled addiction. She, too, has tried various drugs and is certainly no stranger to them.  Bobbi could have any drug she wants, at any time. She has money and she has connections. So, if she was abusing drugs to lose weight or simply to numb the pain and fear she feels as she still mourns the loss of her mother and has no relationship with her father.

Which source contributed to the drastic weight loss is yet to be determined, but based on how quickly and dramatically she lost the large amount of weight, likely one or more of the above factors contributed to her new skinny look. After posting her teeny bikini pic, both Bobbi and Nick went to Twitter to defend her tinier frame after fans expressed extreme concern about her. It would have been in Bobbi Kristina’s best interest to have lost about 170 pounds…of Nick Gordon.

Pretty Little Liars Fans Are Over The “A Game” Games – Is Mrs. DiLaurentis Really “A” Or Another Of The Writers’ Lies