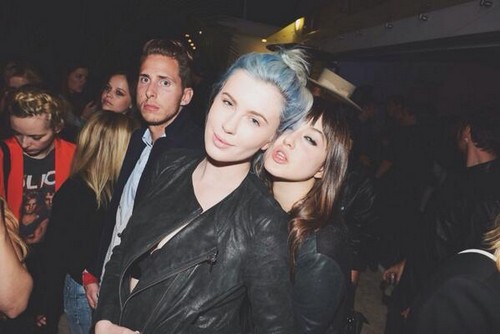 As evident by the title, if you hadn’t known–two weeks ago Ireland Baldwin, daughter of actors Alec Baldwin and Kim Basinger, has dyed her hair (again) turquoise. It had been purple before. Boring. Not newsworthy at all. But I guess that’s what happens when the media has its eyes on the amazing combo of talentless celebrity spawn and twitter.

The only reason Ireland even gets attention is because of who her parents are. She gets modeling jobs because of her parents. She’s pretty–but in a generic way, and it doesn’t help that she’s blonde. Because she’s a generic pretty blonde–not even interesting or unique looking, like her mother. Kim Basinger is gorgeous. Her daughter? Not so much.

I can guarantee that no one would be talking about her or her ‘work’, nor would she be invited to all of these modeling events, if she wasn’t a Baldwin. And after that, there’s nothing really to talk about. She’s not this amazingly versatile model. She’s not talented in acting or music, that we know of. She apparently is not furthering her studies. So all we can talk about is her hair.

Better watch out girl–if you keep this up, twenty years from now you’ll be Jennifer Aniston 2.0. Also known as that one woman who was famous for her hair and a tv show that ended ten years ago.

Ireland will be even lower on the totem pole. She’ll be known as that girl who had famous parents, who failed to launch that into any type of longevity, as a model or any other entertainment career, and then resorted to dying her hair for attention.

What Your Nail Polish Color Says About You and Your Mood!

Best Flat Irons for Your Hair