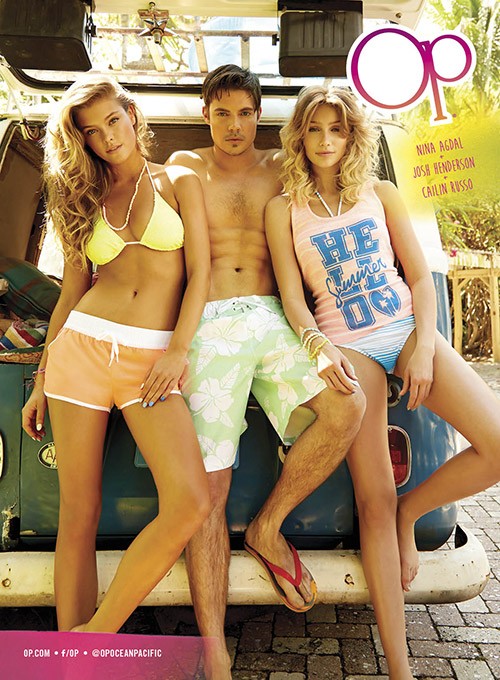 The campaign, aptly named “Sunshine State of Mind,” was shot in Miami, and has a laid-back, carefree feel, representing the brand’s authentic, surf-inspired heritage. The actors join previous Op spokespeople including: Kellan Lutz, Ashley Tisdale, Sarah Hyland, Rumer Willis, Dianna Agron, Mark Salling, Chord Overstreet, AnnaLynne McCord and more, as the faces of the brand.The national multi-media marketing campaign will debut in May issues of fashion, lifestyle and entertainment magazines, as well as outdoor and online at www.op.com.

Josh and Nina had this to say about the campaign:

Josh commented, “It’s pretty cool for me to be a part of this campaign – I’m a laid back, active guy and I just like to be comfortable and that’s a lot like what this brand is. Being the face of Op is an honor and it’s nice to be part of the Op family.”

Nina commented, “My favorite piece of the day was definitely my one piece crochet swimsuit, it was really fun and colorful.” About Op she added, “Op was one of the first companies to take the surfing style and make it more fashionable. I love that they stillkeep it cool and California-like, but chic.”

Enjoy the video and photos!