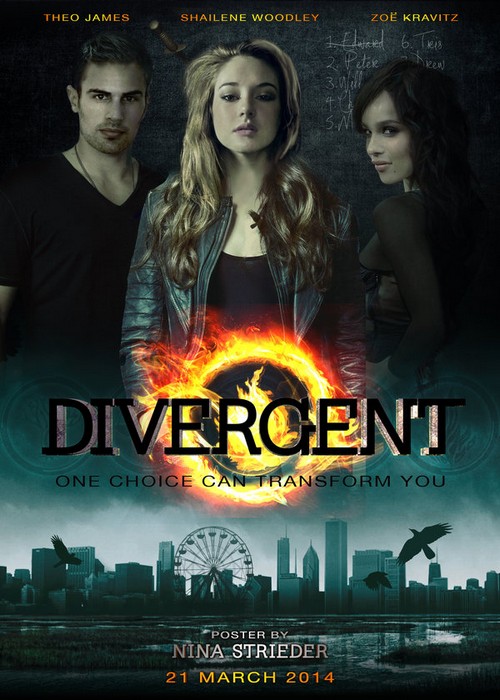 The new movie in town that people and the studio are hoping will be the next Twilight is Divergent.  The books have a very passionate fan base, and while the movie may not reach the heights of fellow Dystopian series The Hunger Games, it looks like it’ll have a solid début.

Having seen the movie, I can definitely attest to the film’s appeal, especially among young girls, but there really isn’t enough substance to last a two-and-a-half hour movie.

The movie stars Shailene Woodley,  Zoe Kravitz, Miles Teller, Theo James, Jai Courtney, and the always reliable Kate Winslet.  For those who don’t know the story, society is divided up into several different factions based on personality traits. When teenagers reach a certain age, they take a test that tells them what faction they belong in and they make their decision on where they want to live the rest of their life – whether they want to stay in their faction, or leave their family and join another one.

To get you prepared for the movie we thought we would introduce you to a couple of the main characters:

Shailene Woodley – Shailene is 22 years old born on November 15, 1991 in California.  She is best known for portraying Amy Juergens in the ABC Familyseries The Secret Life of the American Teenager (2008–2013) and for co-starring alongside George Clooney in the critically acclaimed 2011 film The Descendants, for which she won the Independent Spirit Award for Best Supporting Female and was nominated for the Golden Globe Award for Best Supporting Actress – Motion Picture.

Theo James – Theo is British and is 29 years old born on 16 December 1984.  He is known for portraying Jed Harper in Bedlam.  Theo plays Tobias Eaton (Four) in Divergent.  He is known as four because of his four fears.  Theo has said his characters,  “his character’s complexity,”  made him want to play Four.

Zoe Kravitz – Zoe is 25 born on December 1, 1988.  Zoe is the only daughter of  musician Lenny Kravitz and Cosby actress Lisa Bonet.  She has appeared in a long list of movies including:  No Reservations, The Brave One, X-Men: First Class  to name a few.  Zoe plays Christina in Divergent and is Tris’ best friend.

If your into Young Adult  and dystopia then this is the movie for you!  Check out a sneak peek below.

Michelle Obama and Her Daughters, Malia and Sasha at the Great Wall of China (Photo)